What Will Happen to Your Mining Investments As the Sahel Crumbles? 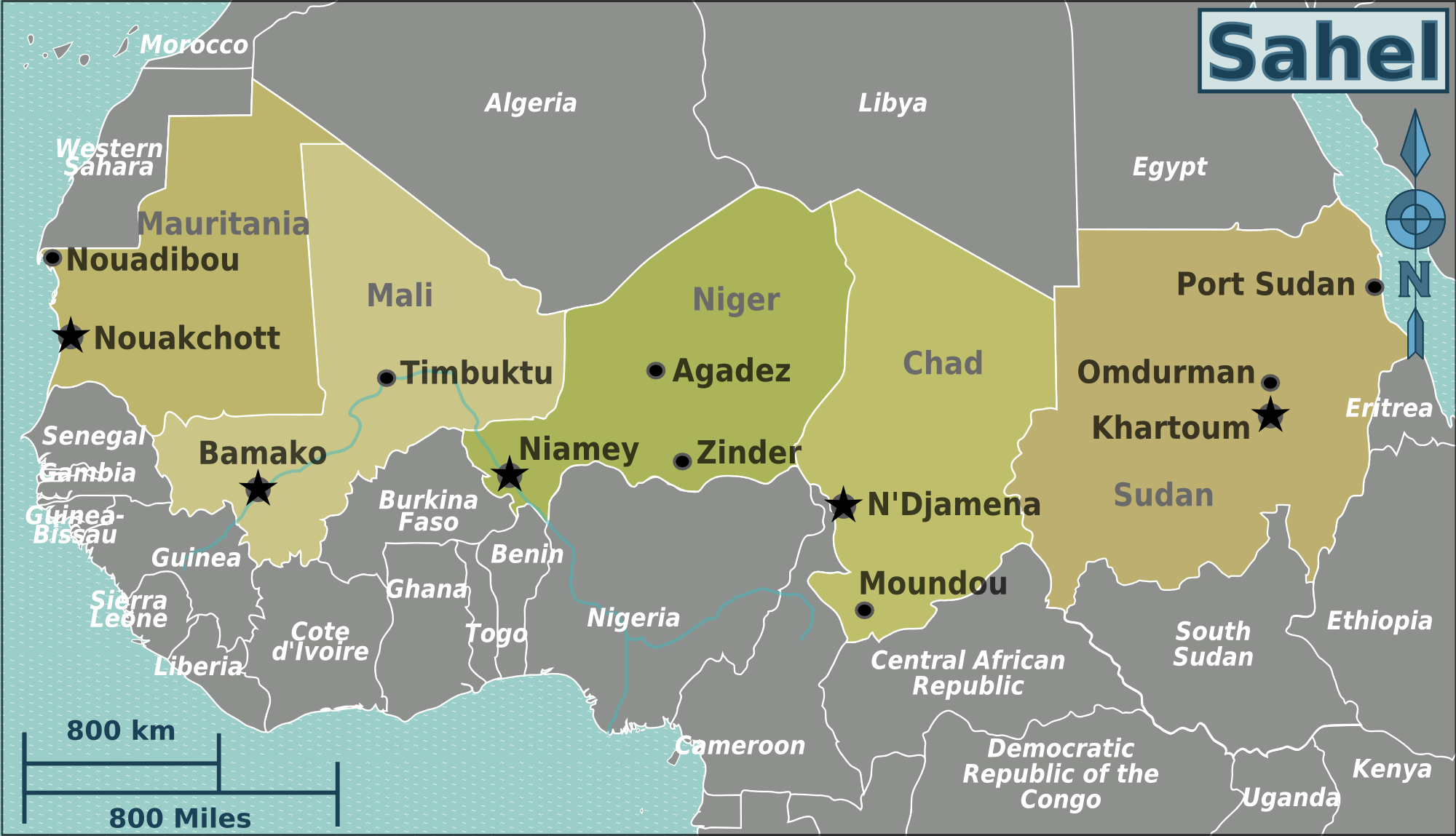 Soumare lies prone on the bed murmuring softly. Above his mosquito net flies flit around, anxious to get at his open wounds.

A strong young man, Soumare is the pride of his family. Until recently, the 26-year-old worked the fields around his village in central Mali, as his community has done for generations before him.

All that came to an end when an improvised explosive device (IED) ripped half of his face off, blinding him. As doctors slowly ease him upright, he groans and shakes in agony, barely able to mutter his name or age.

All around him in Mopti city’s central hospital, dozens of men, women and children nurse horrific burns, knife cuts and gunshot wounds. Such horrors have become all too familiar in stretches of the Sahel.

A dizzying array of jihadist groups, ethnic militias and armed groups are launching almost daily attacks in Mali, Burkina Faso and Niger. Last year, more than 4,000 people were killed and close to a million people were forced to flee their homes.

Slowly, Mali and Burkina Faso are cracking under the pressure, retreating ever closer towards their capitals. Now, across swathes of those two countries, the state exists in name alone, and masked men with guns and machetes have the final say. There is a very real risk that the insecurity could spread out across Western Africa.

The crisis can be traced back to Libya’s civil war. In 2012, ethnic Tuareg rebels and jihadists armed themselves with weapons from Colonel Muammar Gaddafi’s looted arsenals and swept out of the desert into northern Mali.

Years of neoliberal reforms and centralised control from the government in the southern capital of Bamako had left many northerners impoverished and angry. The weak Malian forces fell before the militants. In a matter of weeks, they had conquered an area the size of Britain.

In early 2013, thousands of French troops and Chadian commandos intervened and drove the militants back into the desert. France stationed 4,500 troops across the region on its counter-jihadist mission, Operation Barkhane; the United Nations set up MINUSMA, a 15,000-man peacekeeping mission in Mali.

But the international troops have not been able to stop the jihadists regrouping and rearming. More weapons have flooded in from Libya and the Gulf of Guinea’s ports, and the insecurity has slowly spread southwards out of Mali’s remote north into the country’s central regions and across porous borders.

Burkina Faso’s dictator, Blaise Compaoré, managed to keep the insecurity at bay with his murderous presidential guard and his intelligence services led by spymaster Gilbert Diendéré. But when Compaoré was ousted by a popular uprising in October 2014, things started to fall apart. By late 2015, the government disbanded Compaoré’s intelligence networks. The jihadists saw an opportunity to exploit the cracks in the nascent democracy.

In January 2016, jihadists took more than 150 people hostage in the plush Splendid hotel in Ouagadougou and emptied magazine after magazine into a nearby cafe, killing 30 people.

The speed of Burkina Faso’s decline since then has been alarming – there have been hundreds of attacks. In 2019, there were more than 2,000 reported fatalities – seven times more than in 2018 – according to the Armed Conflict Location and Event Data Project.

There are few set battle lines in the Sahel, which makes the situation extraordinarily complicated. But one common factor is that Gulf states have poured large amounts of money into West Africa to export an extreme Wahabi interpretation of Islam, financing mosques, schools and development projects. Many rebel groups have allied with international Islamist forces.

The local situation is made more complex because fighters can flit in and out of communities and across borders with ease. Often, they change their allegiances depending on the practical circumstances. Many fighters are looking for a steady income, as jobs in the region are few and climate change is shifting agricultural and other patterns.

It is impossible to estimate accurately the number of militants. Rather than trying to dominate territory and fight pitched battles in the same way Islamic State did in the Middle East, the Sahelian jihadists are highly mobile and prefer to ambush local forces and communities before melting back into the scrubland.

There are few set battle lines in the Sahel, complicating the situation

The strategy is paying off. The tri-border region between Mali, Burkina Faso and Niger has turned into a slaughterhouse for local soldiers. From October to November, the Malian army lost more than 100 men in a string of ambushes. In December and January, rebels killed 160 soldiers from the Nigerien army in two attacks in the west of the country.

In the past year, the insecurity has slowly spread out of Burkina Faso’s north and eastern regions across the entire country. The country shares close cultural ties with four Gulf of Guinea countries. The International Crisis Group (ICG) has warned that the jihadists could use the ‘Burkinabe door’ to exploit contentious elections in Côte d’Ivoire, Guinea and Togo.

Like any army, the jihadists have to pay their soldiers. Many wild claims have been made saying the terrorists are now directly involved in the billion-dollar cocaine trafficking routes that criss-cross the Sahara.

The Global Initiative Against Transnational Organized Crime, a collection of international experts based in Geneva, says it has been unable to prove that Al Qaeda are involved in the cocaine trade, but that it cannot be ruled out because the trade is so secretive and lucrative.

However, there is strong evidence that the jihadists have tapped into the Sahel’s gold mining boom. Artisanal miners in Mali, Burkina Faso and Niger dig up an estimated 40-95tn of gold, worth about $1.9bn-$4.5bn, annually.

The gold is trafficked out of regional airports or through Togo and onto hubs like Dubai. Scores of the small-scale excavations are in areas controlled by jihadis. According to researchers at the ICG, many gold diggers are forced to give ‘zakat’ tribute money to the fighters or pay them for protection.

Worse still, military sources say the mines are also providing an ample supply of explosives to jihadi bomb factories. Across the tri-border region, the armed groups are increasingly turning to IEDs to control territory.

However, the jihadists are only one part of the Sahelian puzzle. As the forces of law and order have gradually retreated out of central Mali and rural Burkina Faso, two key things have happened: first, the Islamists have concentrated their recruitment efforts on the Fulani, an ethnicity of herders spread out across the region; secondly, hundreds of self-defence militias have sprung up in rural areas.

Sometimes these militias are simply bands of young men who protect their villages against cattle thieves. But often the groups are heavily armed and based along ethnic lines. Many of these groups have ended up targeting the Fulani, whom they accuse of aiding the Islamists.

Over the past few years, Malian and Burkinabe political elites have turned a blind eye to the militiamen’s abuses. This has led to catastrophic bouts of ethnic cleansing.

The situation is worst in central Mali. There, ethnic Dogon and Bambara have organised into heavily armed militias, sometimes known as Dozo hunters. Human Rights Watch (HRW) gathered evidence showing how the Malian army allowed these militias to set up checkpoints and repeatedly failed to intervene to protect Fulani villages from attacks.

After scores of small pogroms, Dogon militiamen hacked and burned more than 170 Fulani men, women and children in the village of Ogossagou in March 2019. A tit-for-tat cycle of ethnic attacks has continued, leaving hundreds dead.

Militiamen have set up a separate state system in central Mali

Protests over the massacre pushed Malian prime minister Soumeylou Boubèye Maïga to resign in April 2019. Since then, the government has convicted tens of militiamen and banned Dan Na Ambassagou, the most powerful Dogon group. However, humanitarians working across central Mali say that they still have to pass through dozens of militia checkpoints to get through to those in need.

According to a Malian intelligence officer who has infiltrated a powerful ethnic Dogon militia operating around the town of Djenné in central Mali, the militiamen have effectively set up a separate state system in the region, dealing out justice, collecting taxes and even investing in farming equipment for villagers.

“You can drive right across [the] Djenné region and not see one Fulani. If the Dogons see one, they’ll kill him where he stands. They’ve all fled,” says the officer.

Ethnic Fulani refugees say that members of the Malian army also come to attack them.

“It doesn’t matter who it is,” says Ali Aley Burri, from Djiwagou village in central Mali, “they’re all killing us.”

Burkina Faso is facing a similar crisis. As state forces have retreated in the face of an onslaught of attacks, young men across vast rural stretches of the country have joined local militias known as ‘Koglweogo’, meaning ’Guardians of the Bush’.

Far worse could be in store. In January, the Burkinabé parliament voted unanimously to start funding and training local vigilantes. The move is almost certain to inflame tensions further and could drive more communities into the hands of the jihadists.

“This will only lead to more bloodshed,” says Gilles Yabi, director of WATHI, a think tank based in Dakar.

Sahelian governments have a long way to go to rebuild trust between communities, and with their citizens.

“[Mali and Burkina Faso] should deploy civilian administrators to restore some government services and counter insurgent narratives that the government favours one community over another. [And] they should curb abuses by their security forces,” argues Judd Devermont, Africa director of the Washington-based think tank CSIS.

Funding vigilantes in Burkina Faso will only lead to more bloodshed

With the failure of Mali’s 2015 peace deal, governments in the region are also debating whether negotiations are a possible means of resolving the crises. Some groups are more open to talks than others, but many regional governments and their international partners are loathe to negotiate with terrorist groups.

Until Mali and Burkina Faso reestablish some form of control over the hinterlands and diffuse communal tensions, the chaos will continue to spread. In Mopti central hospital, recent arrival Salif Dijbo, a 29-year-old farmer from Bandiagara region, recounts how he came within inches of death.

“We heard a nearby village was attacked so we ran to help survivors. On our way back, men dressed in black attacked us,” he says.

He was shot in the arm, but he managed to get away. Four of his friends and family members weren’t so lucky.

“I don’t know who they are. I don’t understand why they’re killing us,” he says staring down at his shattered arm. “I would do anything to stop the fighting.”