A video of Julius Malema, leader of the Economic Freedom Fighters, one of South Africa’s (and arguably) main political party have made the rounds on social media this week. In the video, he is seen lecturing Mosiua Lekota, the head of the Congress of the People party on the floor of the South African parliament, after the latter failed to support the Land expropriation bill set forth by ANC leader and new president Cyril Ramaphosa.

His speech generated many reactions from activists across Africa, who praised the radicalism of the EFF leader. Nigeria’s Japeth Omojuwa contrasted opposition politics in South Africa with that in Nigeria. 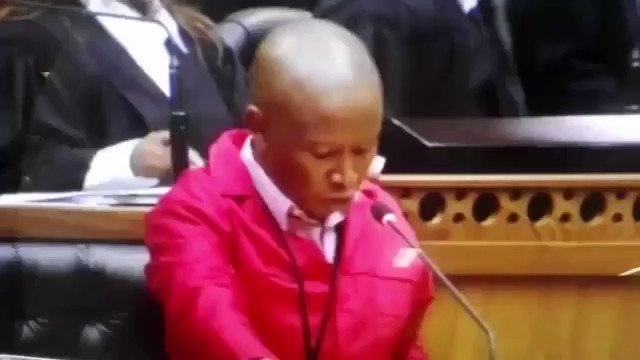 This is how they play opposition in the South African parliament. Not a united gang of armed robbers sucking the nation dry via salaries and allowances pretending to be in opposing parties. Julius Malema, fiery stuff!

However, things go slightly deeper than this in Nigeria.

A change of guard

As African history goes, the past few months have been quite historical for Africa. This period has been a time when some of Africa’s longest-serving leaders and leaders with so much controversy were either forced to step down or stepped down willingly. Robert Mugabe, Jose Eduardo Santos represent the former group, while the resigning Jacob Zuma and the Ethiopian Prime Minister Hailemariam Desalegn have represented the latter group.

One constant feature of these events, especially in South Africa has been the protests; a willingness by the citizens of these countries to fight for their democracy, in the form of mass protests and demonstrations. Countries who have a history with military dictatorships, revolutions, and counter-revolutions, like Ethiopia, have witnessed its people rising to change the status quo; two years of constant mass demonstrations have resulted in its Prime minister stepping down. This is why I have increased optimism that there would be regime change in Togo; its people have been protesting incessantly for almost a year.

Despite the repressive regime of Jose Eduardo Santos of Angola that seemed to last forever, with many of its activists and intelligentsia risking imprisonment for their voices to be heard, pressure remained on him and he eventually stepped down after the last elections in his country.

All of South Africa’s political parties have political ideologies, with people to hold them accountable when they sway from those ideologies. This is why someone could say, boldly, that the ANC isn’t Mandela’s party anymore. It is why Malema could lecture a certain Mosiua Lekota for abandoning his values, and why the ANC had to separate itself from Jacob Zuma and force him to resign after much pressure.

The #Zumamusfall protests and #Rhodesmustfall protests were prime examples of the people being tired of being deceived, and reminding themselves, ultimately, that power rests with them.

The Nigerian Senate, ‘den of corruption’ as a former president described them, is devoid of any ideology. Senators contest under political parties that are actual parties of people with shared interests; emptying the national coffers. The common goal is to eat the national yam together and to go down fighting without spitting it out. Their ideology is their stomachs, and any path that will place them close to power. Nigerian senators change political parties, like an unserious buyer testing clothes in Yaba.

There have been cries for accountability from the citizens who voted them into the Nigerian senate. The Nigerian Senate is one of the highest paid parliament in the world, even without the allowances, but have the most opaque books in the Nigerian government. However, the bigger problem is the Nigerians who vote for them.

The Nigerian populace is docile.

Nigeria has a long history with military rule, the cumulative years being 29 years, 1 more than its cumulative 28 years of democracy. This history comes with a lot of baggage; human rights abuse, citizen repression, the dearth of true party politics, love for corruption, disregard for the rule of law, the inability of citizens to mobilize for protests; all regular features that have been transferred to Nigeria’s democracy now.

The last administration and this have proved that we can do bad all by ourselves. Electing the least qualified people into government twice in a row have resulted in the worst period in Nigeria’s history bar the civil war; the Shiite murders, the unfettered corruption, the IDP bombings, the Boko Haram kidnappings, extrajudicial killings from the police force, recession, the world poverty capital, a crumbled education and health system, a crumbled labor union, a fuel shortage crisis etc.

The effect on the populace has been rather telling; an example is the dumbing down of intellectual conversations over corruption being embedded in the Nigerian public service. Instead, they have been replaced with fables of monkeys and snakes stealing money from the government, and a competition to make jokes out of them.

We claim Nigerians are the most resilient people on earth, that despite all its problems, we are still here. But we are not resilient, what we are, are zombies; people tired of caring, and have grown numb to the plight of other citizens. We have been programmed against outrage outside of Social media, and on the pages of newspapers. Where we have managed to mobilize for social action, we have either not been consistent or have been met with paid agents of the government, and have given up.

Until we are ready to challenge the status quo and pull down the system on which Nigeria is being run, until we take matters into our own hands and not place our trust in any one political candidate, until we demand unequivocally for accountability and transparency from our parliament, and until we indicate to the people who run Nigeria’s State monopoly capitalist economy — that unless we’re free, the machine (Nigeria) will be prevented from working at all, there will be no change, and we’ll keep living as zombies.