African Mining Still Wracked by Trust Deficit Between Miners and

The conclusion of the eighth MineAfrica panel discussion at the Prospectors and Developers Association of Canada conference on Sunday was that “endemic mistrust between private sector miners and African jurisdictions belies the spirit and objectives set out in the African Union’s African Mining Vision.”

According to the technical adviser to the Association Chamber of Mines and other Mining Associations of Africa and CEO of the Namibia Chamber of Mines Veston Malango,  “The biggest problem is mistrust between governments and the private sector. We are currently grappling with this issue.”

“As long as this mistrust is perpetuated, we will not make progress. The African Mining Vision will be difficult to pursue if we cannot solve this fundamental problem of instilling a higher level of trust.”

He opined that transparency is key, since it forms the foundation of trust.

However, this goes both ways; while far too often miners do not play open cards with their host governments, not fully disclosing production figures to avoid full taxation, conversely, miners fear governments want to “kill the golden goose” by taxing the life out of an industry during commodity boom times. 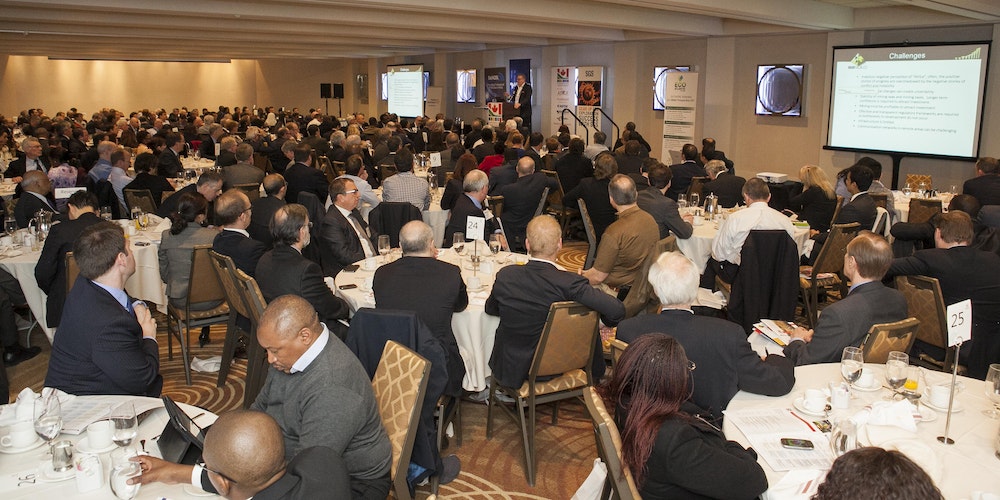 A cross-section of the participants at the conference on March 6th, 2018

Policies for Growth
Governments understand that miners do not come to their countries for humanitarian missions, but are there to produce minerals in the pursuit of profit. However, the minerals beneath African people’s feet belong to them and it is incumbent on the industry to ensure that communities and host jurisdictions share in the economic benefit of their minerals, Ethiopia‘s Mines, Petroleum and Natural Gas Minster Ato Motuma Mekassa stressed.

“We started late with mining policy development. But while we are formulating our policies, we aim to create political stability to enhance mining investment, while taking a ‘best-lessons approach’ for the long term. We know companies are coming for the profit, not only to leave a social benefit,” he said, adding that to further mining investment in the country, the State is facilitating geo-mapping and focusing on creating supporting infrastructure.

“We have untapped resources in Ethiopia, but we want to make sure our communities benefit from investment. We try to establish accountability and transparency as key to mining development.”

The African Mining Vision was adopted in 2009 as a framework to translate several outcomes focused around economic development to the benefit of Africans. The African Mineral Development Center was created to assist in this process and it is currently actively working with 30 African jurisdictions to stimulate investment, United Nations Economic Commission for Africa‘s Africa Minerals Development Center economic affairs office for mineral governance Paul Msoma noted.

“These frameworks are instruments to support the private sector, to the benefit of locals. We’ve created a compact to establish win-win situations with the private sector. The vision calls for the creation of strong linkages within the minerals sector, that encompass skills training, industrialisation and open business involvement.”

“Sudan has untapped natural resource opportunities. We have water, land and 40 minerals, while we are extracting only 13, led by gold,” Sudan‘s Mining Minister Hashim Salim advised. So successful has the country’s emerging goldsector been, that it produced 107 t of gold in 2017, ranking it as the second biggest gold producer in Africa and ninth largest in the world.

He noted that minerals were largely ignored in the past. “We’ve cleared out the old and made way for new ideas – we have new ideas and bold projects. A paradigm shift is needed in the West about Sudan. Our presence here confirms that we are ready for business.”

He appealed to the private sector for help and assistance to meet the country’s development goals, but investment had been stymied by years of international sanctions that had kept the country from accessing new technologies.

“We do not need magic to change Sudan, we already have the power within ourselves. We’ve built a new foundation for a new Sudan. You are welcome. We’ve already relaxed our investment regime to attract investment.”

Land Redistribution
South Africa‘s Deputy Mining Minster Godfrey Oliphant echoed Salim’s sentiments, noting that South Africa is working to restore confidence in the mining administration, following years of attrition under the inept administration of Jacob Zuma. Recently installed President Cyril Ramaphosa has vowed to usher in a “new dawn” for South Africa, and has given the Mining Ministry new marching orders to fix the system and stamp out corruption.

According to Oliphant, incoming Mining Minster Gwede Mantashe has been given three months to sort out miningpolicy problems, especially relating to industry concern about the latest iteration of the Mining Charter, which was, up until last month, being challenged in court on the basis of inadequate consultation.

However, the celebratory atmosphere in South Africa has been dimmed by the ruling African National Congress last week voting in support of a motion by opposition party, the Economic Freedom Fighters, for a constitutional review that would enable land to be expropriated without compensation.

“The Mining Charter wants to repair this. Seventy per cent of the land belongs to 10% of the population. We’ve tried since 1994 to correct this, but in the 23 years since the new dispensation, only 8% of land has been redistributed.

“We now feel it’s better to expropriate land painlessly. We will start with our vast State-owned lands. And there is a lot of goodwill from the private sector and farmers. Disowning land from people is last on the list,” Oliphant said in response to questions about the market uncertainty the new policy has created.

He explained that policy stability is guaranteed in South Africa for periods of at least ten years at a time.

“We want to say our attitude has changed with the new regime. There are no issues of constitutionality. There is no regulatory vacuum in the country. We still have a very stable regime in place. We have environmental legacy challenges, but we are dealing with the ills of the past, correcting the present and looking forward to the future.

“We are looking forward to benefiting from a lot of taxes from you,” he quipped.

Msoma noted that a populist agenda can be reconciled with what is best for a country. Governments are there to create policy, and policies are usually established to address problems.

“The issue of land redistribution needs a conversation, in order to find balance. Industry needs to know there are winds of change happening. But industry refuses to move with changes. There is no government that wants to kill the mining industry. But there are more than 3 200 miners active in Africa, and they have to start conceding to government demands in a constructive way. Dialogue and social agreements among all stakeholders are essential,” he stressed.

Salima said land ownership is a shared issue in Africa. In Sudan, the land is owned by the government, but this does not necessarily work.

“We make it incumbent on companies to share their profits to give money back to people to build infrastructure. We also take a 7% royalty, of which 2% is given to the State to distribute to the people through whatever means. We want to stress that companies belong to the people, because they help them live better lives.”

The African Mining Vision aims to address this issue by stimulating regional manufacturing nodes. However, Malango noted that there is a common misconception among governments that miners are manufacturers and should contribute more to add downstream value to the minerals they produce.

“A miner can, at best, produce a pure metal. But that’s where it stops. Governments should realise that proper policy formulation should stimulate manufacturing investment to get value-addition going.

“Africa is sitting with a significant young population and natural resources offer a great opportunity to uplift them. The mistrust between government and industry is exemplified by what is happening in Tanzania, and it is just the tip of the iceberg that will spread if trust issues are not sorted out soon,” Msoma cautioned.