Zambia’s foreign minister has announced his resignation in a scathing Facebook post, denouncing the country’s “path of insatiable greed and shame”.

Henry Kalaba said his decision was prompted by the “swelling” levels of corruption “perpetrated by those who are expected to be the solution”.

Analysts suspect the move is an attempt to pressure President Edgar Lungu, who is considering seeking a third term.

There is currently a two-term limit in the Zambian constitution.

Mr Lungu, who has been accused of being increasingly authoritarian by his critics, is arguing in the courts that he could stand for a third term, as he only served part of his first term following the death of his predecessor, Michael Sata.

Mr Kalaba, an MP for the governing Patriotic Front (PF), is said to be a possible candidate for the 2021 presidential election, should Mr Lungu step aside, Reuters news agency reports.

“People have started realizing that they will not get nominated as long as Lungu insists on standing.” Lee Habasonda, an analyst from the University of Zambia, told Reuters. 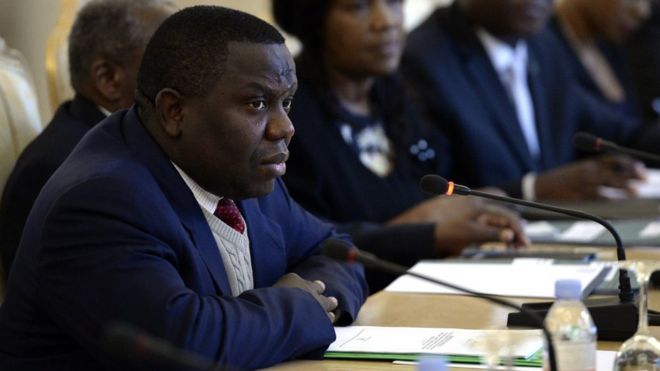 Harry Kalaba (pictured in 2015) has resigned his cabinet role

However, Mr Kalaba did not refer to his presidential ambitions in the Facebook post, instead focusing on what he says is growing corruption at the highest level, as well as his desire to serve his “country and its people” over “a position, party or person”.

“We need to go back to the original agenda of our party, the PF, where the poor and not the corporates must be at the centre of all our decisions,” Mr Kalaba wrote, going on to blame Zambia’s current financial woes on “collective carelessness and indifference”.

The post, which has prompted thousands of comments, concluded: “When people begin to feel overwhelmed by fear for speaking the truth, it is time to realize that critical fundamentals have shifted. We all have a role to play in making things right. This is my little contribution – Zambia is our country, we need and must reclaim it back.”

The president’s office says it has not yet received an official resignation letter.

How Much Is Zambia’s External Debt, Seriously?
April 9, 2018

Ghana Mortgages Sovereignty, Will Host US Military Base for $20m
March 24, 2018