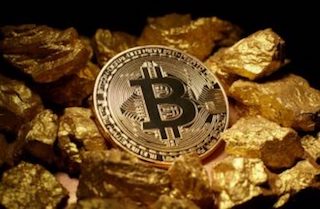 The Investing News Network (INN) caught up with Frank Holmes, CEO and chief investment officer of US Global Investors (NASDAQ:GROW), at this year’s Silver & Gold Summit to get more insight on the future of gold and cryptocurrencies.

Holmes, who is also chairman of HIVE Blockchain Technologies (TSXV:HIVE), began by sharing his thoughts on the surge in the price of bitcoin.

“I think the real big phenomenon is that bitcoin is not dismantling gold. Bitcoin is waking up the world on blockchain technology — the ability to send transactions inexpensively, no counterfeits [and] decentralized around the world in 10 minutes,” he said at the sidelines of the conference.

Holmes had a lot to say about the relationship between gold and bitcoin, what’s ahead for precious metals and what other commodities he likes right now.

In your talk this morning, you discussed both gold and cryptocurrencies. In your opinion, what’s the relationship between the two? Do they compete? Is one better than the other? Are they equal? Where should investors focus their attention?

First of all, you can’t wear bitcoin, and two, you need electricity for it to be functional. I think that’s the big difference between them, but they’re both asset classes that are currencies. Gold functions as jewelry, it functions also as money and it’s the fourth-most-liquid asset class in the world, so it’s very different than bitcoin.

I think the real big phenomenon is that bitcoin is not dismantling gold. Bitcoin is waking up the world on blockchain technology — the ability to send transactions inexpensively, no counterfeits [and] decentralized around the world in 10 minutes. This phenomenon taking place for investors is most disruptive in the capital markets. It’s much easier and much faster for Millennials to open an account at Coinbase, as it takes only minutes.

The blockchain world is predominantly venture capital money. I think with the success of HIVE in the Canadian markets you’re going to see all of a sudden real blockchain companies go public that have revenue and cash flow.

How are you getting exposure to cryptocurrencies? Is HIVE your main play there?

Yes. When I had the opportunity presented to me, I said, “wow, Abigail Johnson’s Fidelity is a $2- to $3-trillion corporation, the second-biggest discount broker in the world.” All of a sudden, all of their employees were on bitcoin and their funds became large shareholders of HIVE. You saw this sort of formation because they’re educated — the culture of Fidelity is the most educated as an asset management company. It’s not just money managers, it’s all the employees that embrace launching technology.

Obviously bitcoin is the dominant, the most trusted player in the cryptocurrency world. What are your thoughts on some of the emerging cryptocurrencies?

Moving to the gold market — when you look at 2017, did gold perform as you expected?

Bullion’s doing great, [it’s] up double digits; gold’s done exactly what it’s supposed to do. What really took it on the chin for the gold stocks was the push to go into the GDXJ (ARCA:GDXJ). The GDXJ captured 95 percent of all gold equity fund flows, and even though our funds all outperformed it, we didn’t get the fund flows we would normally get. They became so concentrated with all this money going into one product, that all of a sudden they owned 20 percent of 20 companies.

So the gold stocks have been really [downtrodden] — and a lot of people don’t understand that really it has to do with the GDXJ’s success. It’s a disaster. If you’re worried about ETF bubbles, it’s going to be much more with all the money going into the S&P 500 (INDEXSP:.INX) just because cheaper is better. Otherwise, I think that there are great opportunities in the gold space, there are great opportunities for gold fund managers. The only problem is that there aren’t a hundred thousand accounts a day going into mutual funds like there are going into Coinbase.

What about 2018? When you look ahead, what do you think? Do you think gold will continue on the same path?

I think we have reached peak gold because of the [lack of] technological breakthroughs. I think you’re going to see small and mid-cap companies get bought up by the Newmont Minings (NYSE:NEM) of the world. The fact that Newmont went to Colombia and bought Continental Gold (TSX:CNL) for a premium — it’s an important sign that they’re not, in their own exploration, finding reserves fast enough to replace their production.

[We’re also seeing] supply restrictions from bullion hitting the market, global GDP churning up with PMI, money printing continuing along with negative interest rates. The only way to get positive interest rates and not have a global recession is to streamline regulations. Until there’s real will by all the regulators to streamline regulations, then you’re going to have to live with low interest rates. I don’t see rates rising much more than this in the next three to six months. It’s amazing that the US was raising rates and the currency still goes down.

Outside of gold, are there any other commodities that you’re following or excited about that you want investors to be looking at?

I think when gold goes to $1,350 per ounce you’ll get a quantum leap in silver. Silver always has sort of a catch up, and all of a sudden it’s the best performing. So I think that silver is the laggard. And anytime anybody buys these stocks they should always be putting 5 percent of their savings into bullion and silver coins.

Just to balance that, would some of their portfolios be cryptocurrencies at this point?

With that process at least 1 percent because it’s still so small, but it continues to grow. The reason why HIVE was such an out-of-the-box success was because it’s very much like Silver Wheaton. When Silver Wheaton came up, now Wheaton Precious Metals (NYSE:WPM), there was no other royalty company in Canada. Silver was on a tear, and they had a new way of doing royalties and streaming. The only difference here is that we saw HIVE quickly go to a dig in, and that was the big shocker.

In terms of trends next year, what do you think we’ll see? You mentioned majors may come in and buy development companies. Anything else that you think is going to trend for next year?

I think it’s going to stay focused on a quiet approach towards all investing. If you don’t want to look at all the individual gold stock names, then you should look at our US Global GO GOLD and Precious Metal Miners ETF (NYSEARCA:GOAU). Over 10 years of correlation analysis, it’s doing exactly what we projected it should do as an ETF. We launched our product in June, and I think it’s outperformed the GDXJ since then by 8 percent.

What Can We Do About Bitcoin’s Enormous Energy Consumption?
December 19, 2017

Just How Crazy Has the Cryptocurrency Bubble Become?
December 13, 2017